I am sort giggling to myself and I write this as I had no idea I would be doing a DIY post on a cheeseburger. That wasn’t the plan! My kiddos decided very late this year on their costumes. Up until Friday night my son was planning to be a cool dude {your guess is as good as mine} and then I showed him photos online and he kept going back to the cheeseburger. He begged me and I thought it was the cutest thing ever so it was full steam ahead. He may have gotten it in his head because we have been playing with this so much lately. This costume cost roughly $20 to make and took only one hour to make. It really is so darn simple and I think it may be one of my very favorites. He was Mickey one year {that we made ourselves} and that was high on the list as well. The how-to is below. I will tell you they are all iPhone photos. I didn’t really plan on doing this as a post and the kids and I were having so much fun making it together. They both helped the whole way through and I didn’t have the heart to stop and take “blog worthy” photos. So without further ado . . . I present you with a great set of buns. 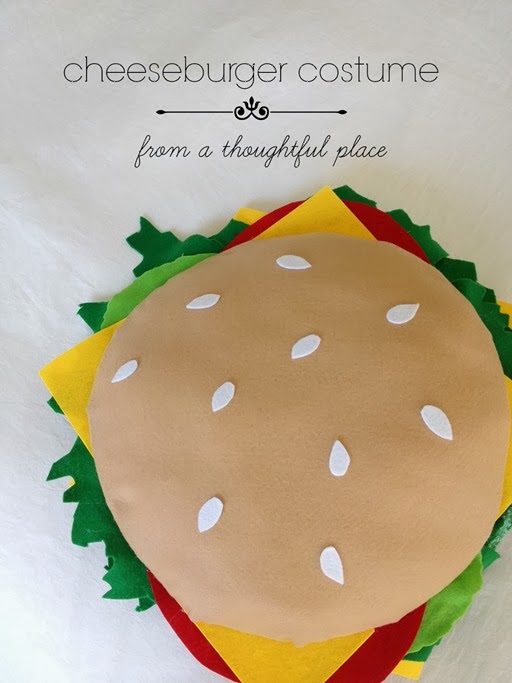 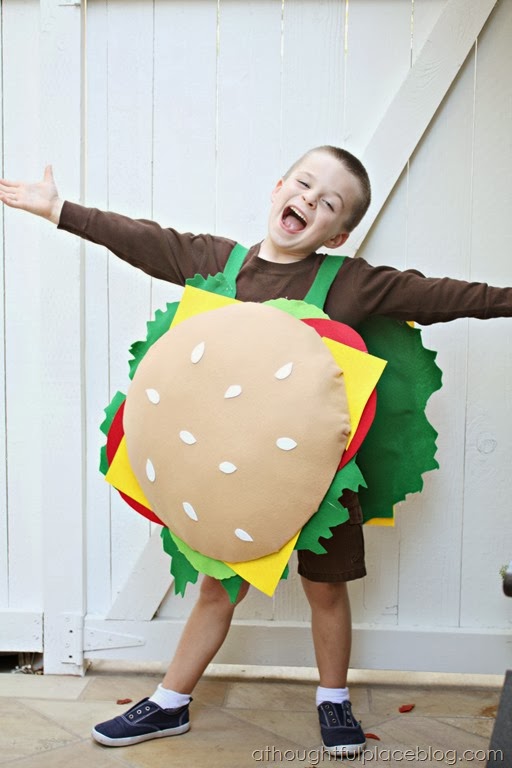 What I love most about this costume is that my son really wanted people to laugh. He is a happy little soul and wanted something that would make people smile. I like that. A lot. You can tell from the photo we could have made him a ham for Halloween! 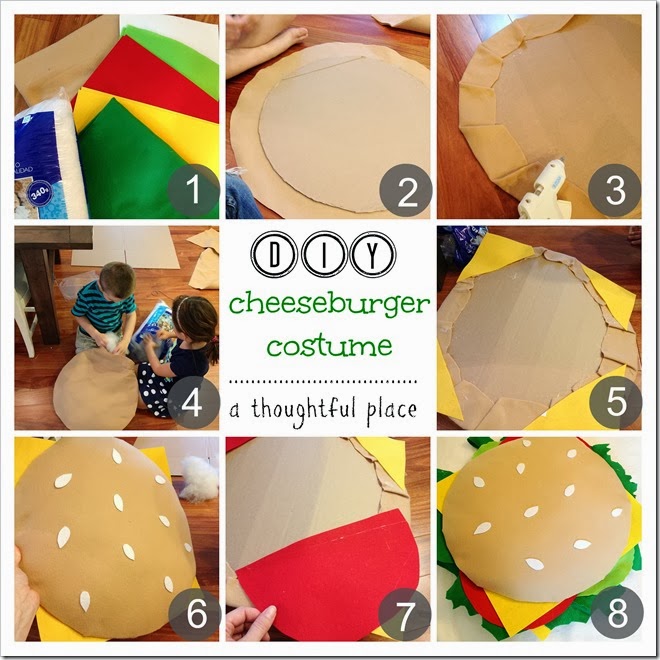 Supplies
felt: brown, white, red, yellow, green, light green
glue gun
fiberfill
scissors
a moving box {size large} or cardboard
Directions:
Begin by cutting two circles from cardboard. I used a large moving box from Home Depot. Lay the circle down on a piece of light brown felt doubled over. That way you can cut two at a time. Allow a couple of inches so glue around the back. Leave about 10” unglued so you can stuff the fiberfill into each bun. Then cut seasame seeds. I used a piece of white felt that had an adhesive backing. Loved that! Found it at Hobby Lobby and it was so easy to just cut out those seeds and stick them on the buns. Glue the remaining brown felt to close each bun. Start adding your toppings! Begin with four triangles of cheese. Place them so they look like one large square. Cut two half circles for the tomatoes. Glue down. Cut two pickles. Lastly, cut the lettuce. Learning from my mistake, I would have just cut one giant piece like I did for the back bun. Make sure the edges are nice and jagged to look like lettuce leaves. For the back bun, we only added cheese and lettuce. Attach the two buns with two strips of felt. My son chose green straps to match the lettuce. I think dark brown would be great to blend it with your child. Dress your little one up on dark brown as the patty and you are done! 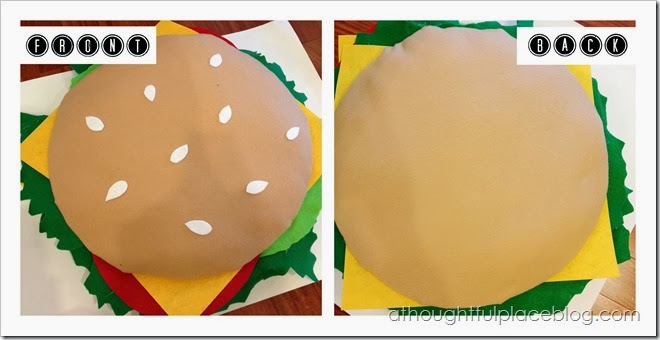 Here is a close up shot to show you how I tried to cut the pickles and lettuce to be add some dimension. 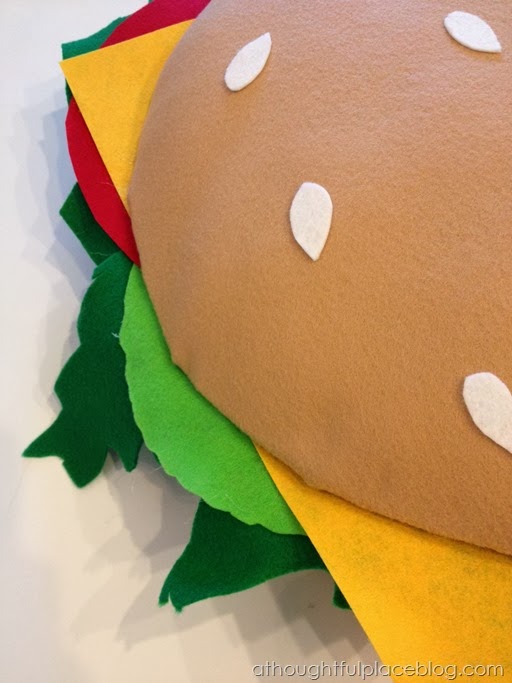 …
You can see this is not a super professional job! There is glue gun mayhem all over the place! But to attach the two buns, you simple glue two strips connecting the two. I tried the buns on him by holding them up. He held one and my daughter held the other. 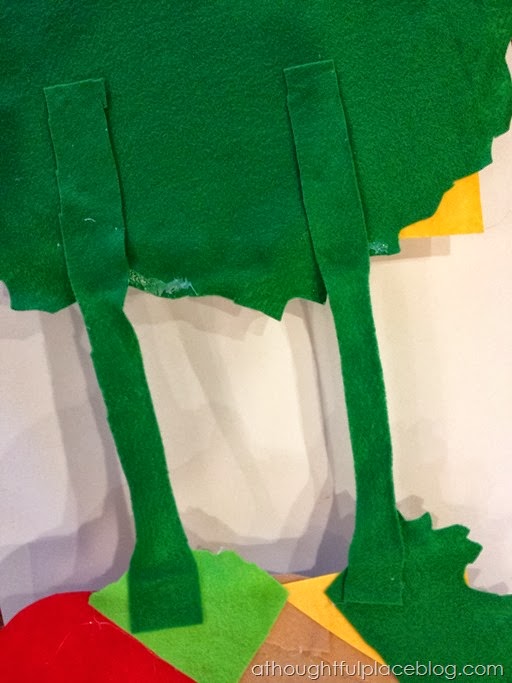 The good thing is you all can learn from my mistakes. The left side shows how we did the front bun. I should have done one large piece of lettuce like I did on the right. It looks much more finished. I didn’t really know what I was doing and the effect from the front it still the same. If you try this, I would suggest one large piece of lettuce glued to each bun as a nice finishing look. 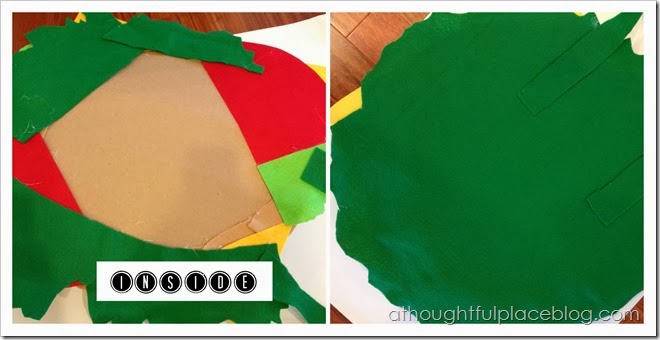 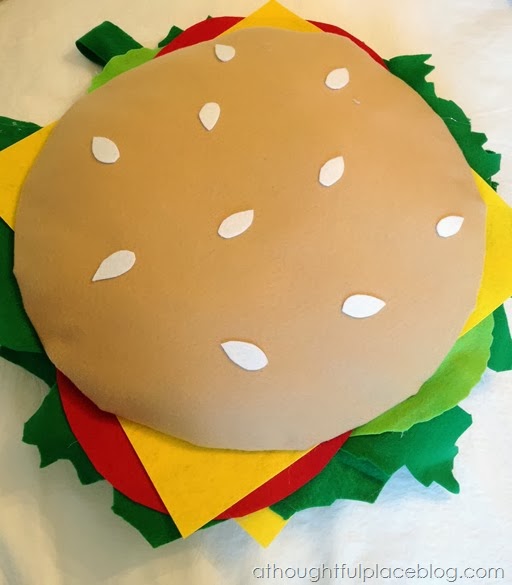 And there you have it. A cheeseburger! Ready to wear in just one hour.  My daughter chose an angel costume. We are reusing a pretty flower girl dress she had hanging in her closet and working on making a lovely halo. While they didn’t intend on going as a pair, I think “Hamburger Heaven” is a no brainer?! Anyone with me?