As you know we just returned from the city by the bay. I had called upon my IG friends to share their favorite San Francisco spots and they rose to the challenge. I couldn’t believe how helpful and awesome everyone was. But we knew we only had two days . . . and two kids! Traveling with children always effects the itinerary! We really could not have asked for a better weekend. So I wanted to share how to do San Francisco in two days in case you are every up for visiting. While it’s easy to have a list of places to go, I wanted to show you step by step how we did it without a car. Sometimes you need more of a road map than just the hot spots to cover. I hope these tips and tricks make traveling to San Francisco easier for you. Warning! This post is not for the faint of heart. There are a  million photos and I will be back with Day 2 later. 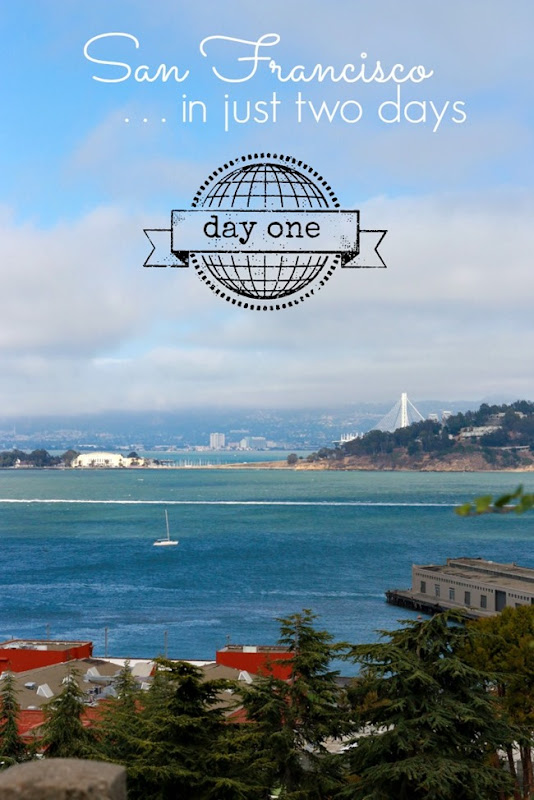 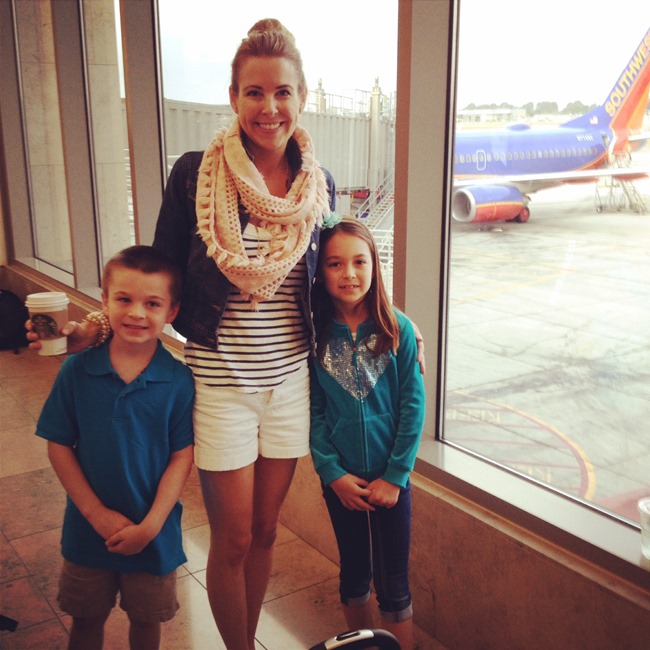 We flew out early so that we could arrive in S.F. for breakfast. We knew we wanted to spend all day Friday and Saturday in the city and travel home on Sunday. 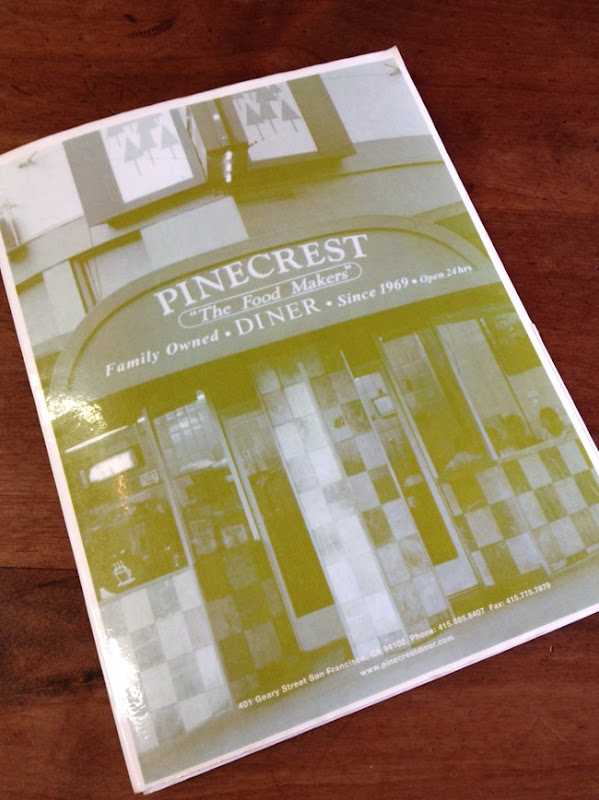 As soon as we landed we took a taxi to our hotel {Hotel Monaco}. It’s located on Geary street, a short walk from from Union Square. We knew our room would not be ready but we could drop our bags, have a quick look around, grab some ice water and be on our way. Can’t say enough about the staff and hotel. So welcoming. They even have complimentary bikes for guests to use. More on the hotel later. We headed out on foot down the street to a greasy spoon for breakfast. While gourmet is not their claim to fame, good ole’ eggs, pancakes and sausage are great for fueling up for the day. 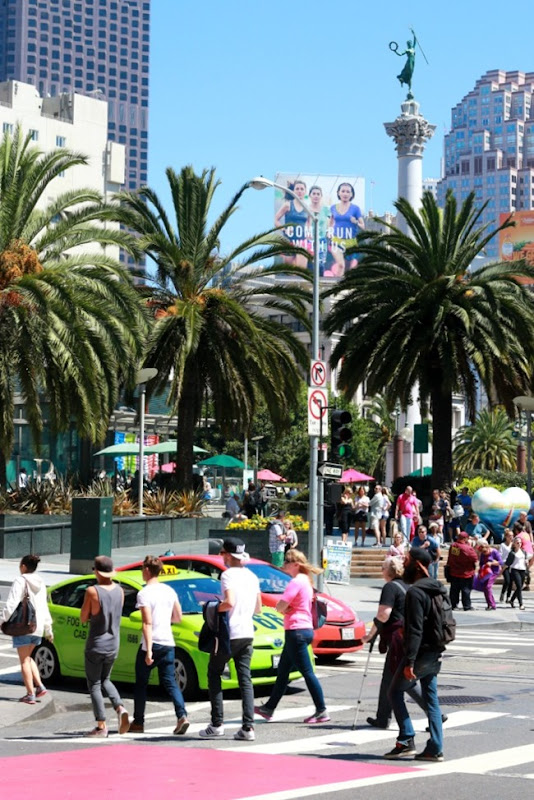 It’s amazing how a big, yummy breakfast can perk everyone up. We were good to go and set out for Union Square. . . quick walk away. It’s a bustling center with artists displaying their masterpieces. Fantastic shopping surrounds the area if you are up for that. I decided to spare my kiddos and didn’t shop at all. However, we did cruise through Neiman Marcus to cut through and I highly recommend it. Gorgeous store with a beautiful ceiling. My children both took pictures of it. 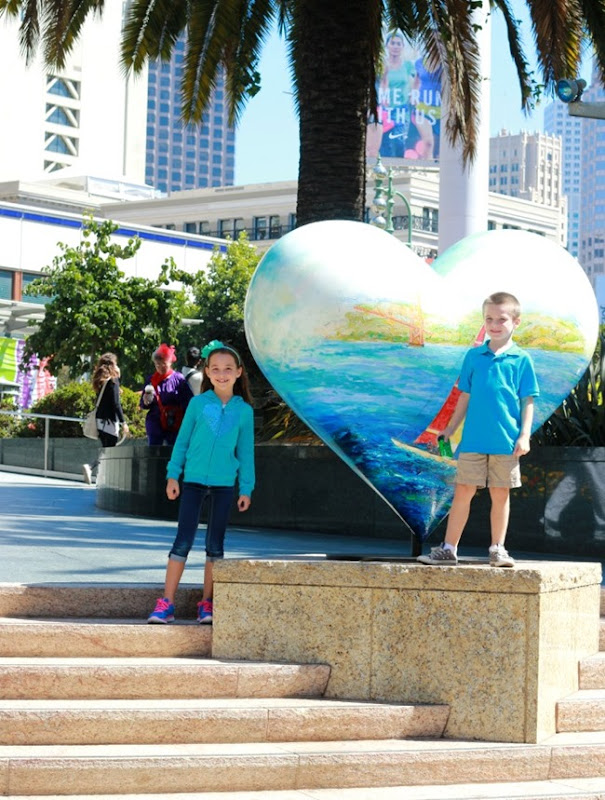 After Union Square we spent a good hour just touring around the surrounding streets. You can’t go wrong. They are filled with beautiful stores, fun hotels, great people watching and colorful scenery. And yes . . . it’s a big city so there are also many people begging on the streets. If you are taking children, I highly recommend you have a chat with them about this so as to better explain. They are little after all, and it can be shocking to see people sleeping on the sidewalks. 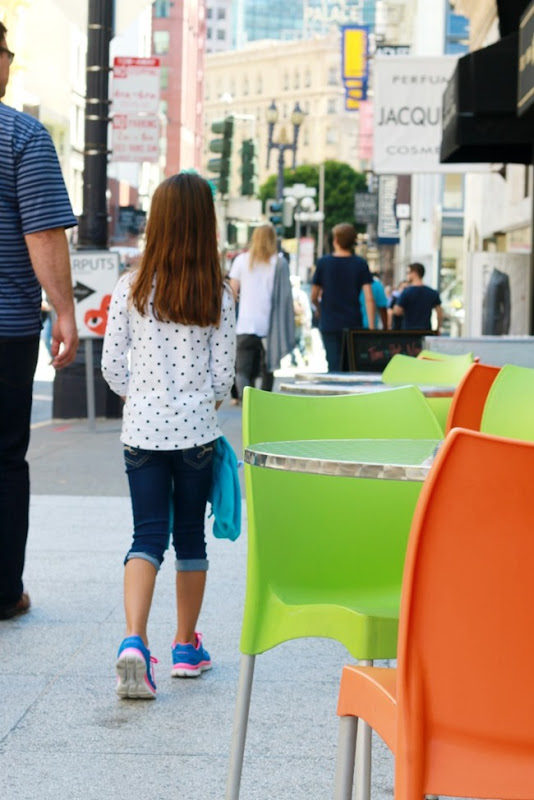 Traveler Tip: If traveling with children, consider giving them a disposable camera. My kids had a blast framing shots and figuring out what they wanted to capture. We told them they could make a book about our trip when they returned home. Costco will still develop old school cameras! 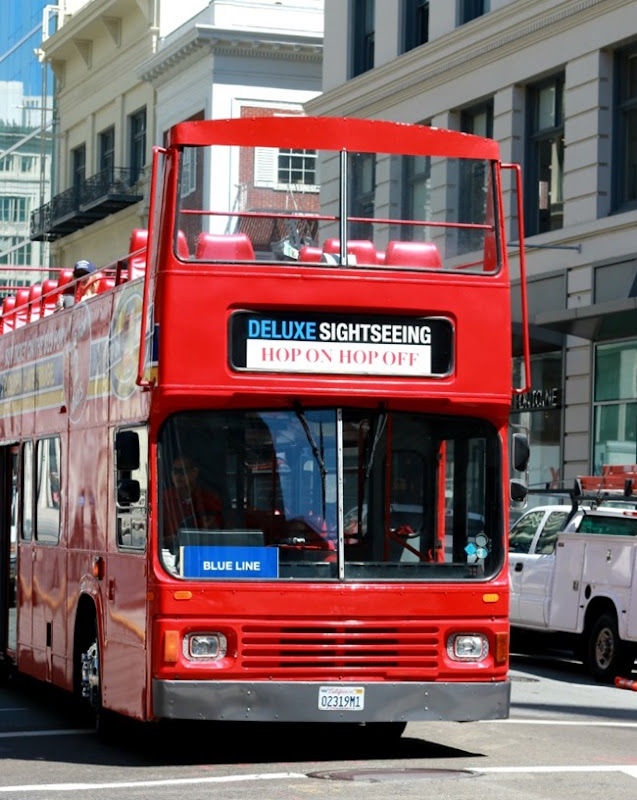 Of course you can always hop on one of these bad boys but we decided to keep on walking! 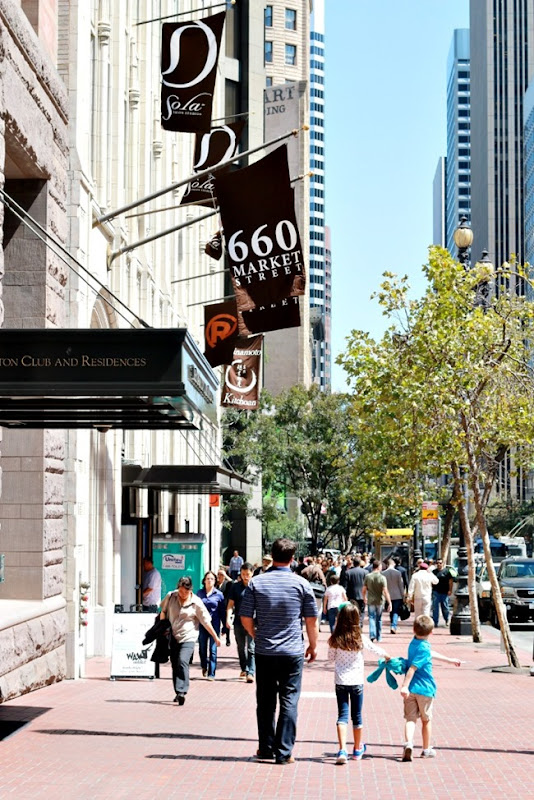 Market Street is home to the Ritz Carlton residences and is just a fun part of town. 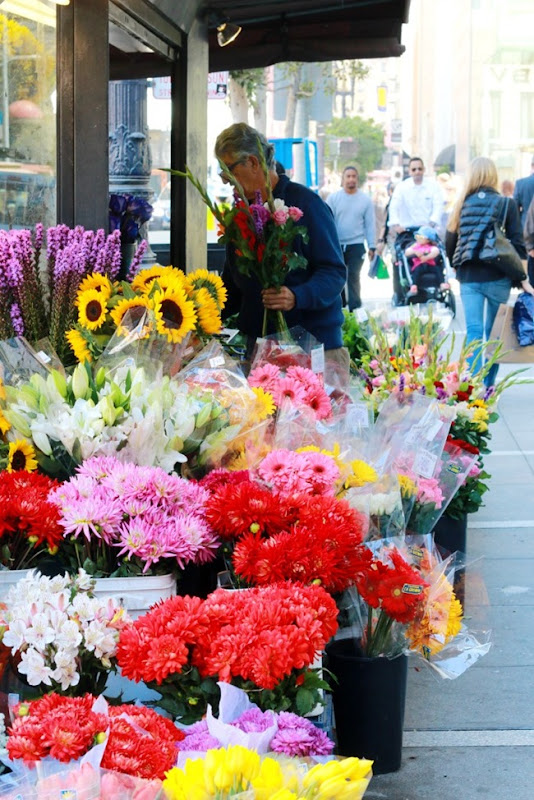 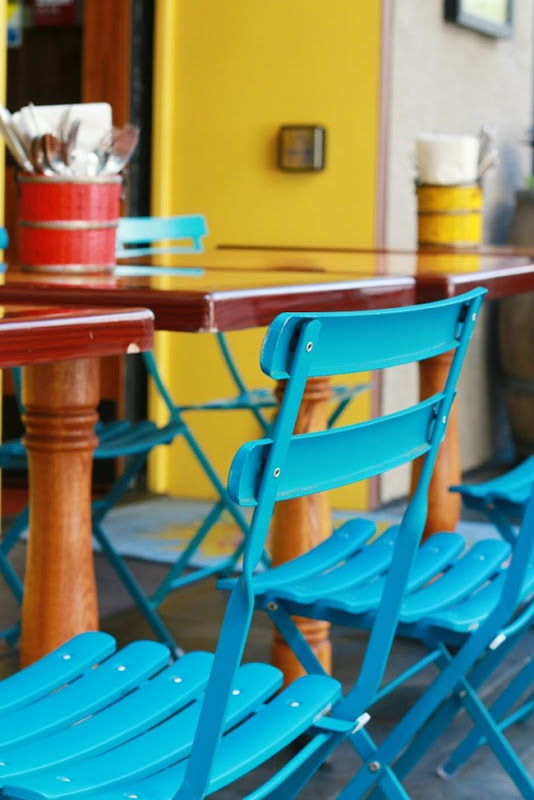 I am a sucker for color and stopped quite often to appreciate it. We came full circle back towards Union Square around noon to get settled in our hotel room and freshen up. 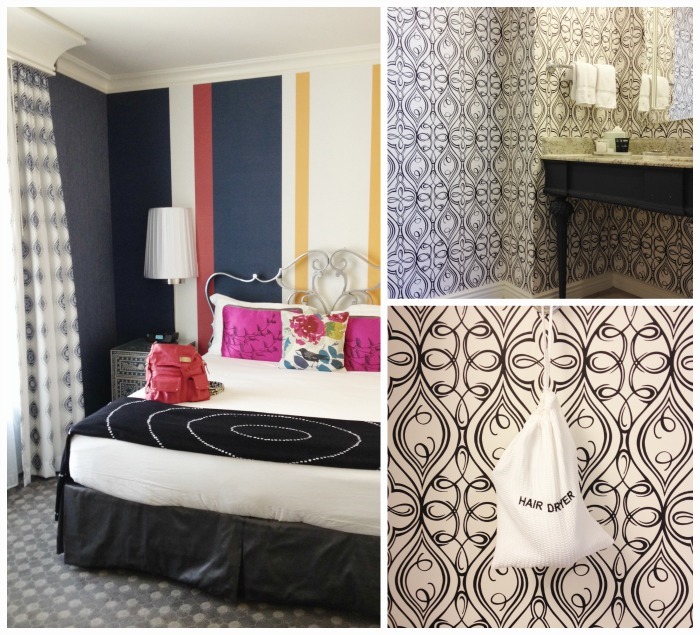 Hotel Monaco was recommended to us by my dear friend, Tina. She and her family had stayed there and thought it was great. Awesome recommendation. We had a small suite which allowed us to have a living room separated from the bedroom by a sliding door. The sofa pulled out to a queen bed for my children to share. It was a great amount of space and we loved the color and pattern. The hotel offered a coffee bar, pastries, fruit and iced coffee each morning. They also hosted wine in the living room each evening. We were always out around town, but nice to know. 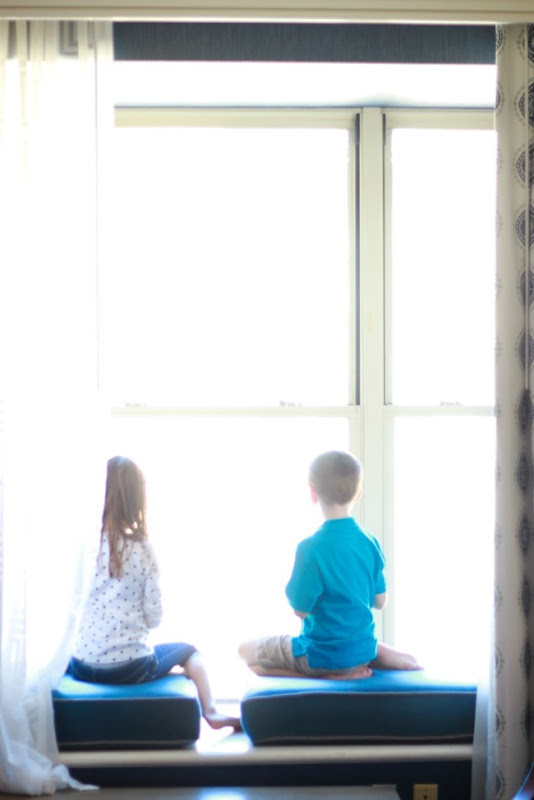 The kids hopped immediately onto the window seat to watch the city below. Sweet. The view isn’t outstanding. . . more like a Walgreens and people walking to and from Union Square. But for kids straight from the burbs it was more than they could hope for! 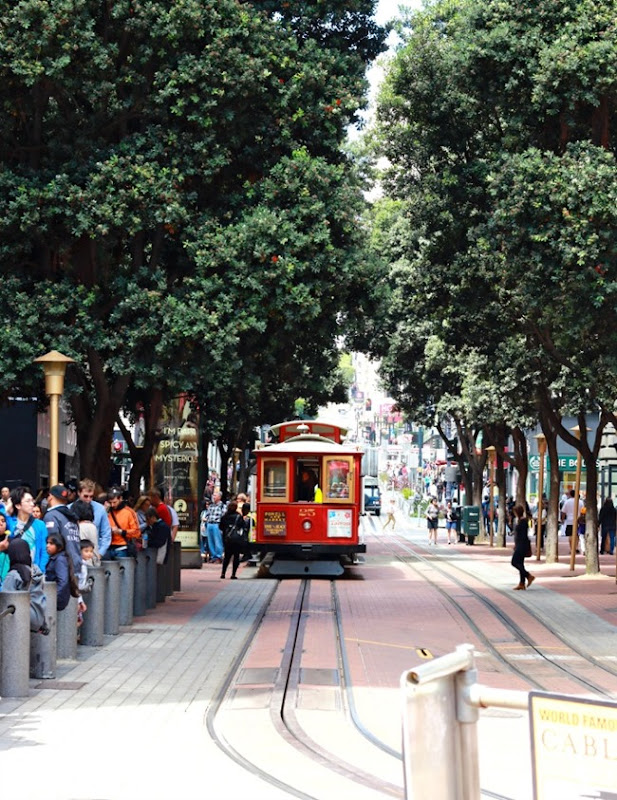 Once we freshened up we were off. We took a right onto Geary {where hotel is located} and then a right on Powell street. That led us all the way down to where the Cable cars turn around. Such a fun spot. From there we hopped on the F bus to take us to Fisherman’s Wharf. You want to cross the street and catch the buses headed towards the wharf. It was $5.50 for all of us to hop on. 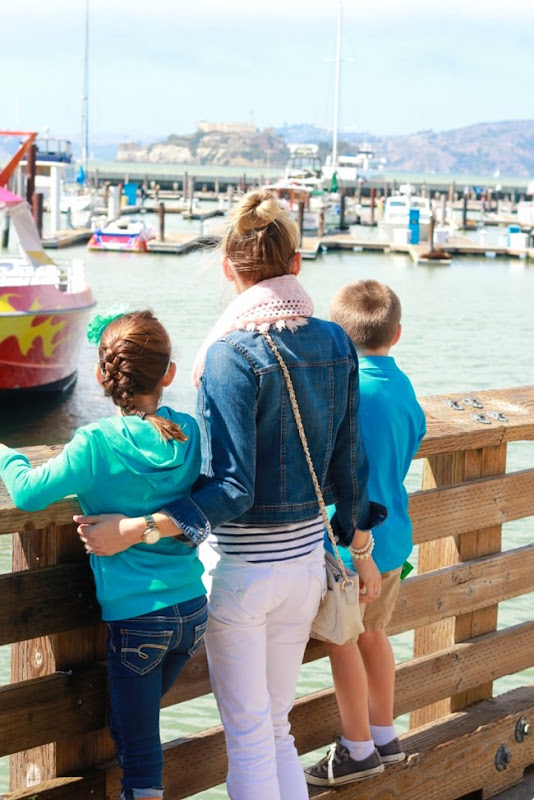 You can’t go wrong down by the water. Just so much to see and take in. The children were enamored with the street performers and so happy to be enjoying the scenery. 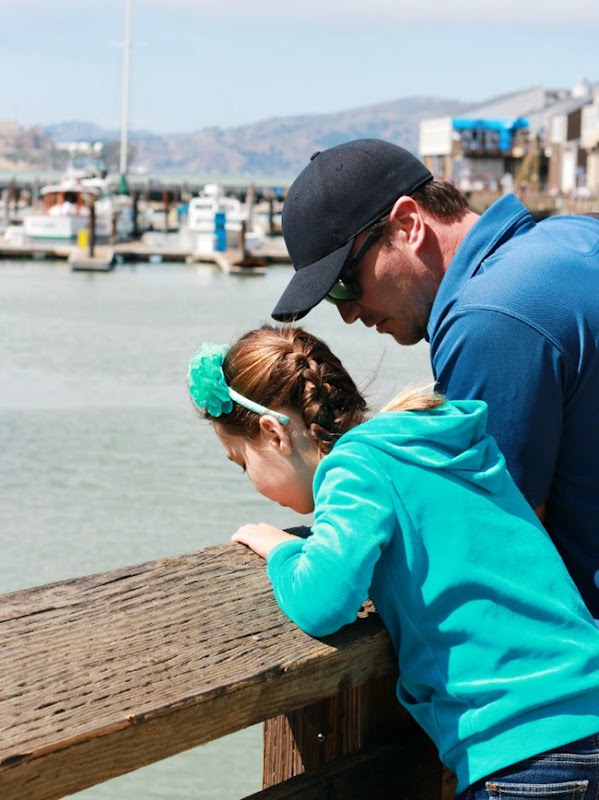 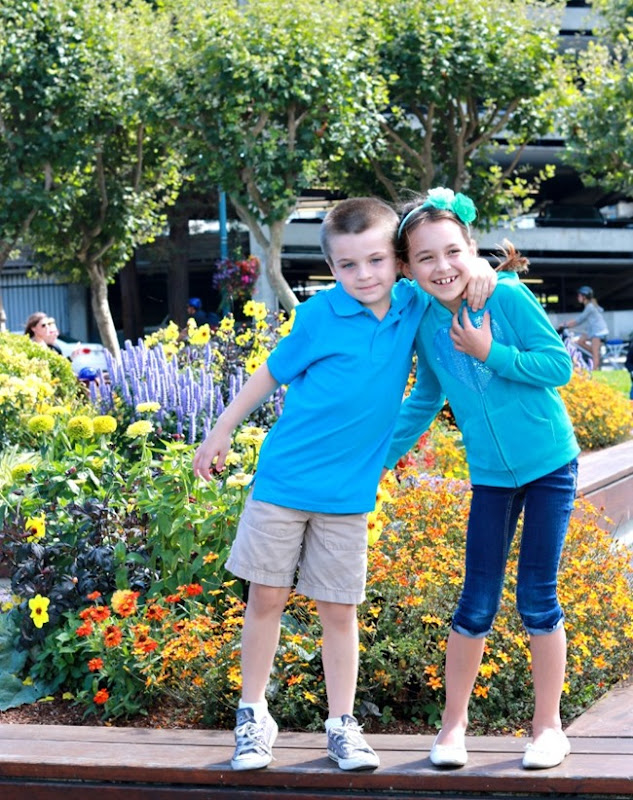 Sweet photo of the kids. . .until he tried to strangle her. All while smiling. Good times. 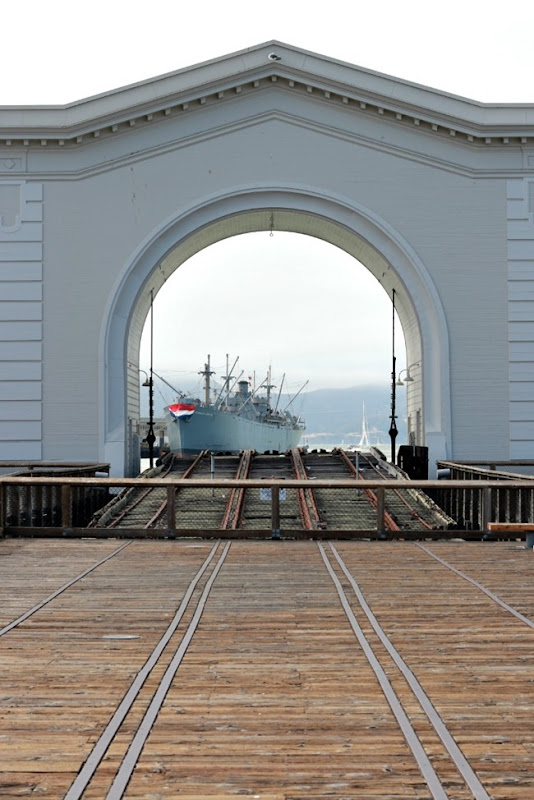 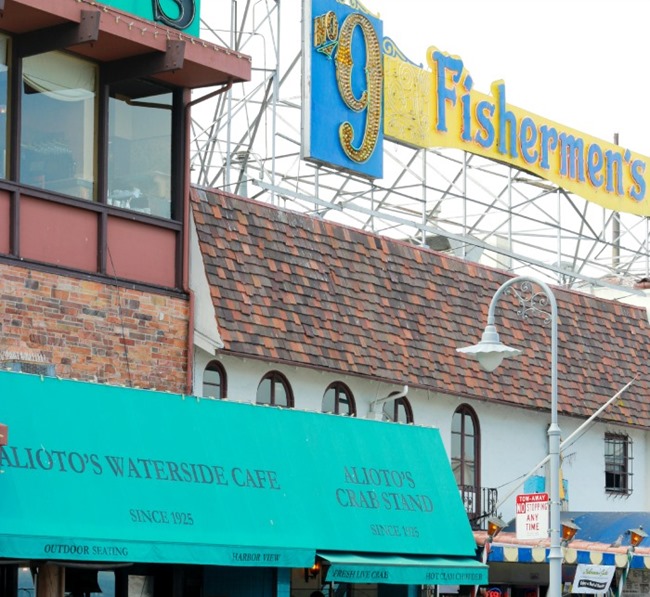 We took our time walking around the Embarcadero and then wound up here at the wharf. 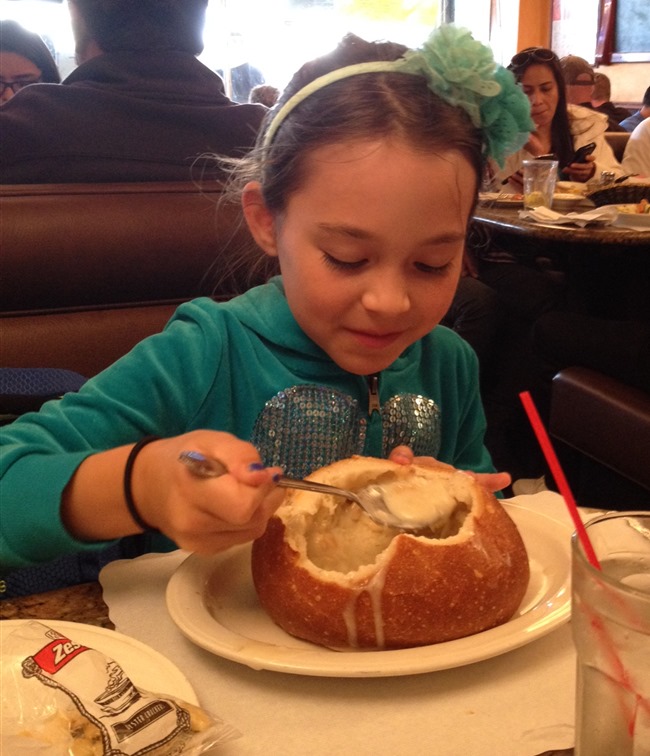 We hit up Sabella and La Torre for clam chowder bread bowls. My daughter was in heaven. She had no idea clam chowder could be so delicious. We all devoured it. . .it was a nice late lunch after eating such a big breakfast. It was probably about 2:00 by now. 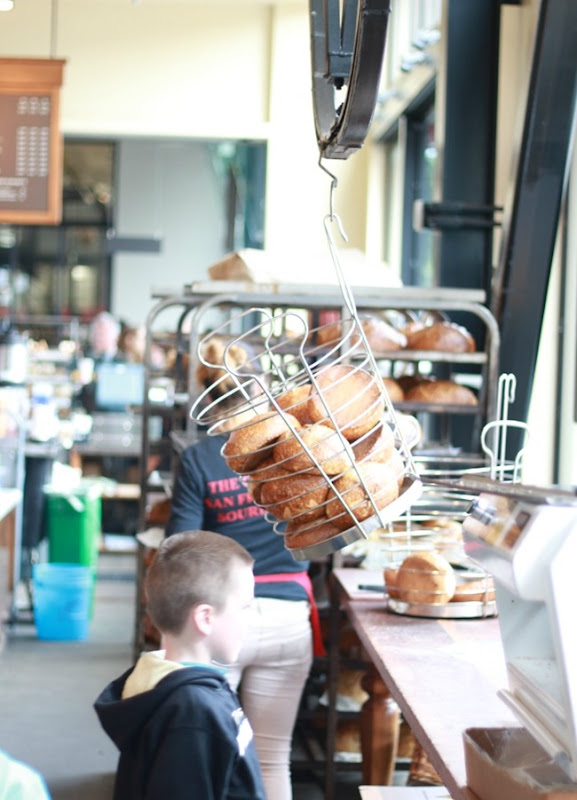 After clam chowder, we walked back up on Jefferson street to Boudin. Fun for the kids to see the unique bread shapes. The photo above was snapped just before my son walked into a hanging bread basket. They travel on a track through the store. . . beware! Ha! 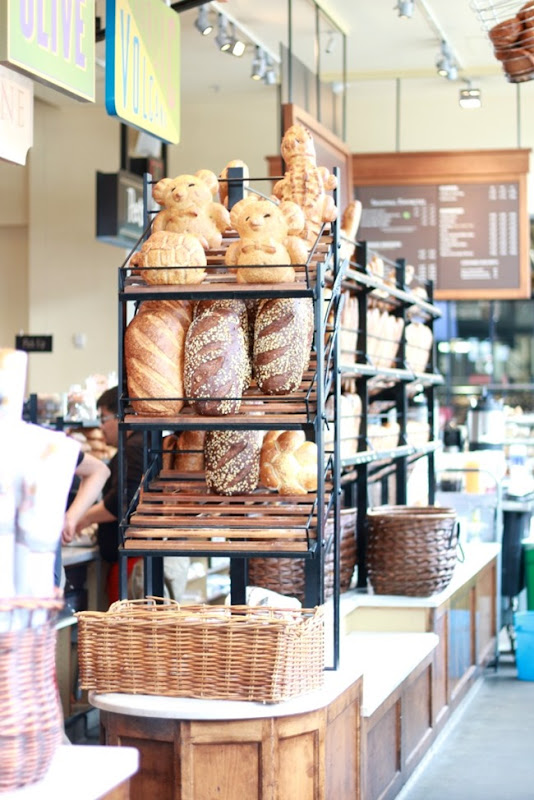 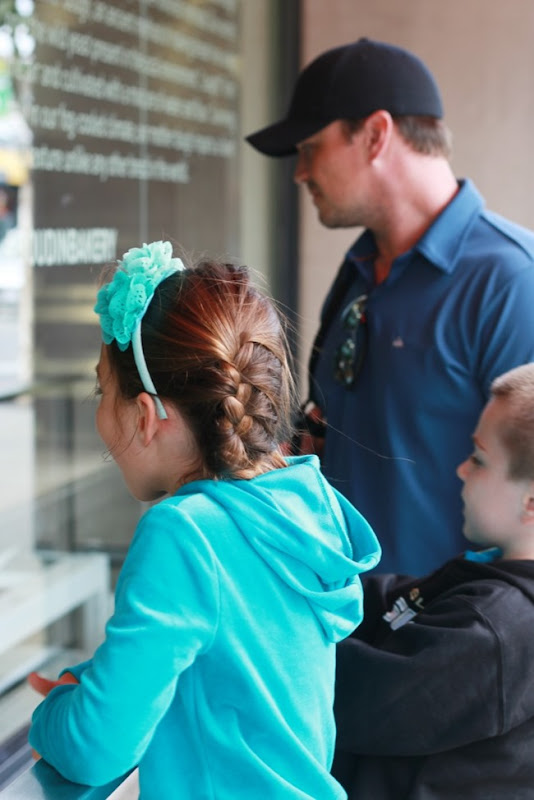 Outside of Boudin, you can watch the bakers work their magic. It’s so fun to see! 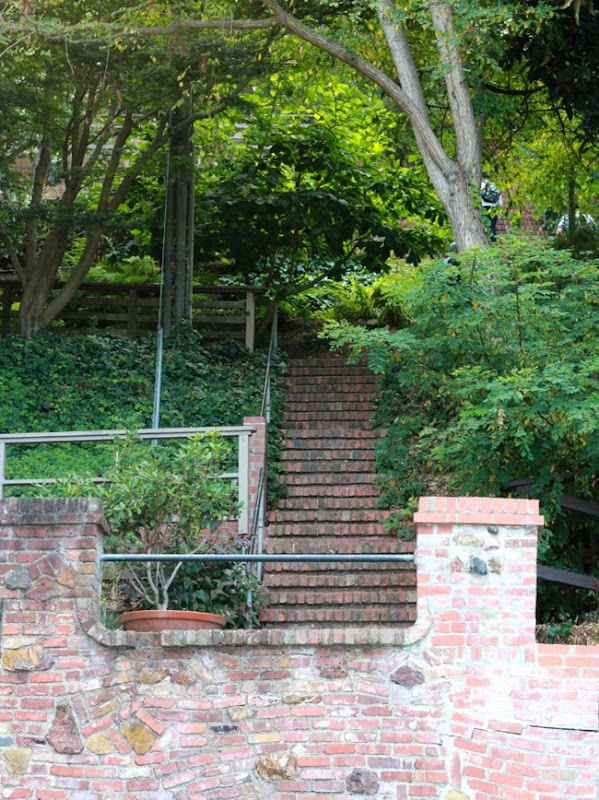 From there we paid a very strong man on a bike to ride us to the bottom of Coit tower. Those bike rides are super fun and a must as far as we are concerned. Nice not to be enclosed in a taxi. It cost $15. He dropped us off at the foot of a VERY LARGE staircase that leads to Coit Tower. Traveler Tip: San Francisco is cold and windy. Bring a sweatshirt or coat. Even if it’s the middle of summer! 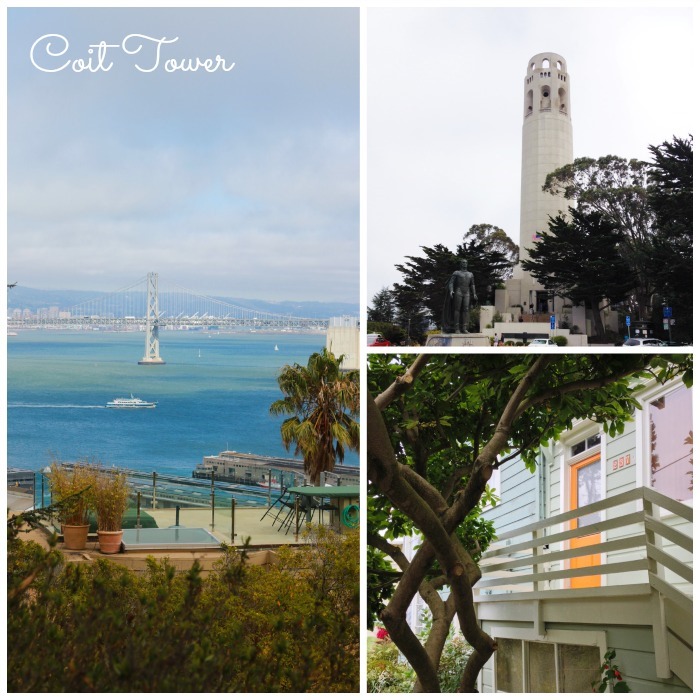 This was such a highlight. It is a must see and do in our book. The actual hike up the stairs is breathtaking. . .because of the views and because it’s a workout. Nice stair master for the day. Along the way you can’t even believe the darling homes and gardens nestled in the hillside. It’s hard to believe you’re in the middle of a big city. We love both the hike up and the hike down. And the photo above on the left . . .that is someone’s rooftop deck. Oh, hey. . . wanna be friends? I could totally hang out there. Traveler Tip: If climbing the stairs to Coit, wear comfy shoes. I didn’t get the memo and my flip flops were sub-optimal. Live and learn. 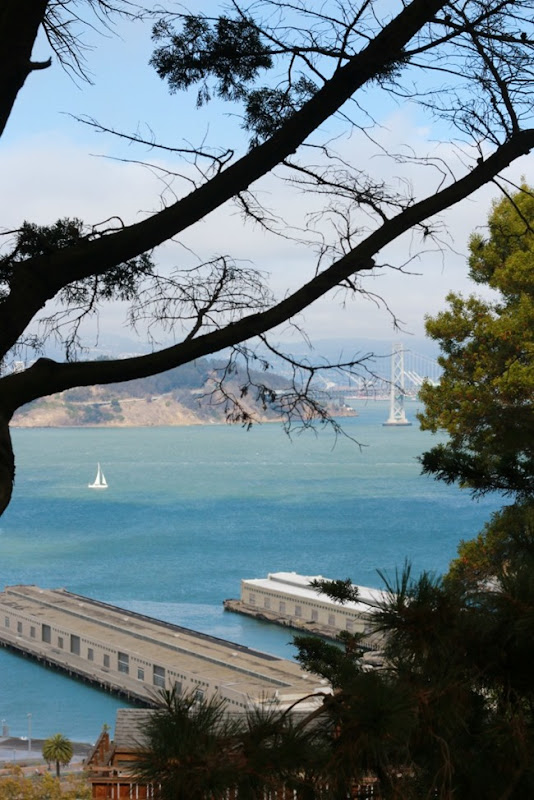 Truly, every time we turned around it was a more spectacular view. Once at the top, you can take an elevator ride to the top of Coit Tower. It was a 45 minute wait and the family voted no. It’s all about maintaining a level of peace and democracy when traveling as a family! We had already really taken in such gorgeous views and were content to head back down the stairs. 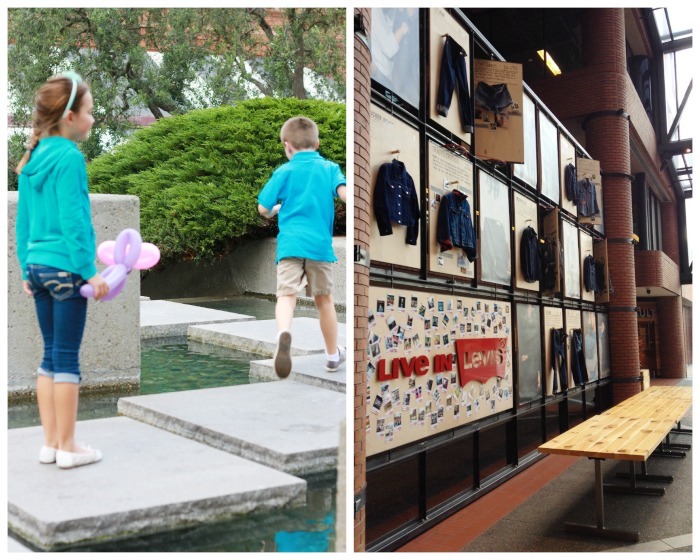 Once you walk down from Coit you’ll find yourself in a little neighborhood. Head to the Starbucks for a refreshment. You’ll be up for a cold drink by then. We asked a few people headed to a local gym if there was a neighborhood coffee spot but they said that was it. It’s huge and there is even a cute little creamery to the right of it. FYI there is no bathroom in it so if you walk further back there is the Levi Straus building. It’s AMAZING! SO fun to look around and seem the equipment they made the first pair of jeans on. I am envious of anyone who works in this building. It’s rock star status. And they have a lovely bathroom. I wanted to snap a photo of me in my jean jacket inside but then I remembered it was Old Navy and that’s just poor taste. Ha. After that, we walked outside to a great fountain and fun stepping stones for the kids. We like to just explore and were so happy to find this spot. 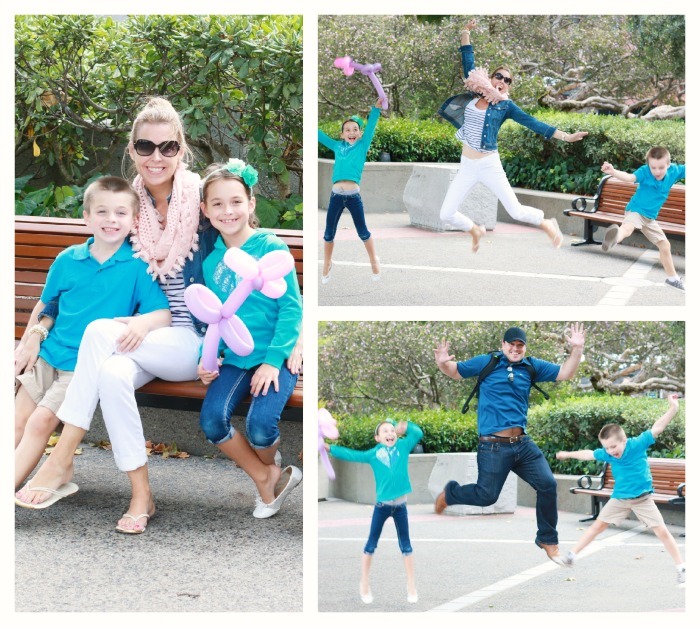 And traveling with us is never a dull moment so it wouldn’t be right to now show you some of the photo mayhem that goes on. It’s a good time. These benches were just outside the fountain area. Fog City  is located nearby on Battery Street and came highly recommended. You could wrap up the Coit tower hike with a great dinner there. We had a reservation for a different restaurant so we used the Uber app and a car came in five minutes to take us to dinner. Sweet sauce! 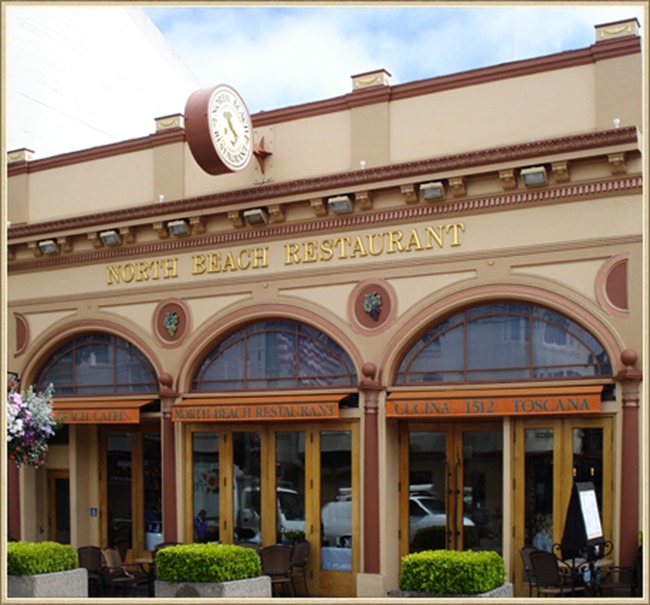 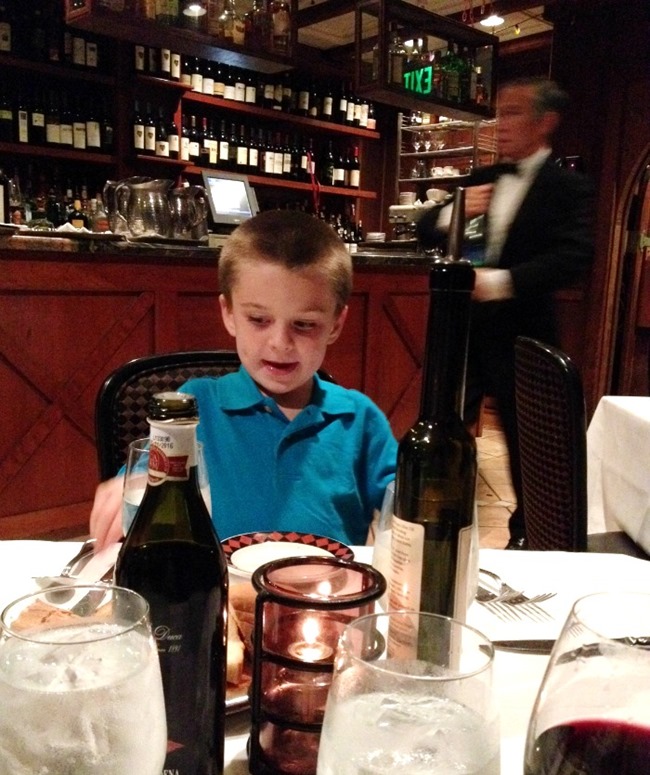 We capped the night off with a quiet and delicious dinner at North Beach Restaurant on Stockton Street. I had made reservations through Open Table as I knew we would all be tired and hungry! We were only going to be there two nights so we wanted to treat ourselves to a couple of yummy dinners based on some rave reviews. It was pricey but really good. My children loved that the waiters had on tuxedos! While there were plenty of people dressed up in coats and all, we were not out of place in casual clothes. The food came quickly which we always appreciate and did not disappoint. All four of us loved everything. It was a nice quiet way to end a pretty eventful sight seeing journey. From there we took a taxi back to our hotel where we were surprised by a lovely note and bottle of sparkling cider. Great hotel! As an alternative, Tony’s Pizza Napoletena is just down the street from North Beach Restaurant and is very highly rated by everyone. Super casual and yummy. There is normally a line to get in and they do not take reservations so plan accordingly. Traveler Tip: Uber is a fantastic car app service. No money is exchanged as they have your account safely and securely on file. The car and drivers are screened so cars are very clean and smoke free. It doesn’t cost much more than a taxi. Great app for your phone. We used it a handful of times and is was great. San Francisco Day Two San Francisco Street Style {Fashion Post}